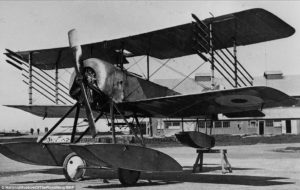 It was though that they were practically fireworks, in 1930

The new timeline now insists they were introduced in 1916

Fired from an aircraft, they were called the Le Prieur rocket, and they were meant to disturb balloons and airships, mostly in WW1. They were unguided, crude, pretty much a cardboard tube filled with gunpowder.