Notice: Function add_theme_support( 'html5' ) was called incorrectly. You need to pass an array of types. Please see Debugging in WordPress for more information. (This message was added in version 3.6.1.) in /home/i7p1hle703og/public_html/mandelaeffectlibrary/wp-includes/functions.php on line 5831
 Say Goodnight, Gracie – Mandela Effect Library 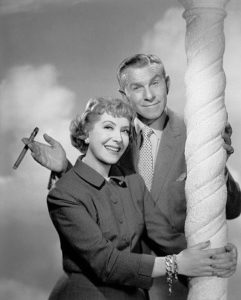 Many remember the way George Burns ended his show in the 1950’s. Gracie Allen, was a friendly scatterbrained character. He’d turn to her and say, “Say goodnight, Gracie”, she’d reply “Goodnight Gracie”.

The thing is, wind the tape back, she only says “Goodnight”!?

The Burns and Allen show ran from 1950 to 1958 on CBS, and won many Emmy award nominations.