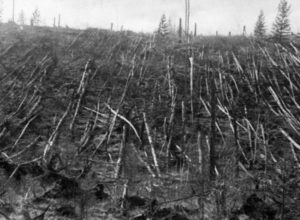 A massive explosion occurred in Tunguska, Siberia in 1908. Some say a meteorite exploded above the area.

The energy was supposedly 10-15 megatons, 1,000 times Hiroshima, but today, supposedly, there were no deaths.

80 MILLION trees were FLOORED. 830 sq miles. Some thought it was an earthquake, a 5 on the Richter, but I guess now we’ll never know…