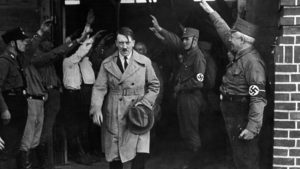 Apparently, Hitler had a thang for Crystal Meth

New timeline: Nah, that was a myth

The Weimar Republic, Germany’s pharmaceutical industry was thriving, and exporting morphine, and cocaine. Drugs were readily available. The Nazis prescribed methamphetamine (Pervitin) to their army and air force.

When Hitler fell ill in 1941, Morell, his doctor, prescribed Meth & cocaine. It might’ve even killed him, but you do the research.