Notice: Function add_theme_support( 'html5' ) was called incorrectly. You need to pass an array of types. Please see Debugging in WordPress for more information. (This message was added in version 3.6.1.) in /home/i7p1hle703og/public_html/mandelaeffectlibrary/wp-includes/functions.php on line 5831
 Star Trek: Picard’s Crystal – Mandela Effect Library 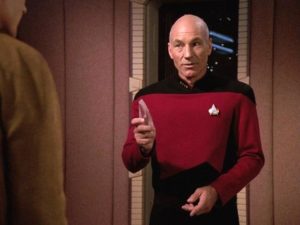 Originally: No one noticed Picard having some crystal

New timeline: Picard had a crystal in over 70 episodes

Jean-Luc Picard, captain of the Starship Enterprise, The Next Generation, had a crystal on his desk that he played in over 70 episodes, but we never noticed it?

Well, a replica of the crystal is now for sale in the Roddenberry shop, advertised as having appeared in “no fewer than 78 episodes”. Well okay then. Wow.