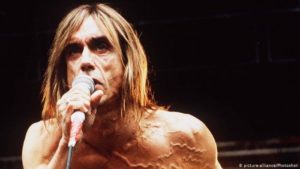 New timeline: Iggy Pop is alive and kickin’ yo

Iggy is still performing at the age of 70. Born James Newell Osterberg Jr. in 1947, Iggy Pop is known for his wild stage performances and songs such as: Lust for Life, The Passenger and Real Wild Child.

His first band was The Iguanas.

He invented the “stage-dive”!? Wow.