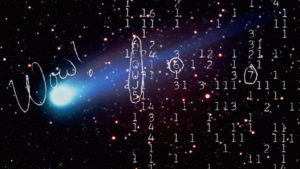 The WOW Signal, 1977, astronomers at Ohio State university caught a 72 second burst of radio waves that were crazy off the scales.

But where did the signal originally come from?

It’s Mandela anyway, stories explain it, drama enfolds, then they’re refuted. Go ahead, do the research…