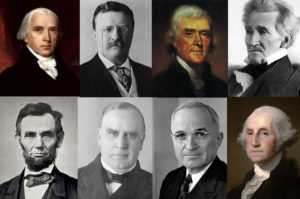 I’m just goofing with you. The photo is of the richest and poorest of American Presidents. The effect though, is how many serving Presidents were shot and killed, and the consensus seems to be 2, or at least it was…

New timeline: 4 serving presidents have been shot and killed

Lincoln and Kennedy. Reagan was shot, but he wasn’t killed.

The four killed by gunshot whilst in office are:

The number of attempts though, on a tangent, is over 30!