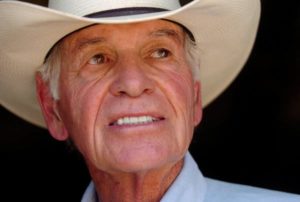 Marlboro Man died of lung cancer in the 1990s

Those that experience the Mandela Effect remember advertisements for cigarettes. The most memorable ad featured the Marlboro man, Robert Norris.  He ended up dying in the 1990s from lung cancer.  On this new timeline Robert Norris lived until he was 90 and died in 2019.