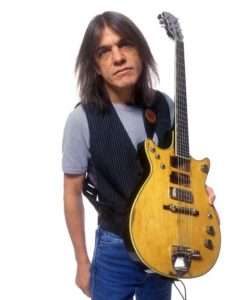 Emigrated from Glasgow, Scotland in the UK, Malcolm formed AC/DC in 1973 with his brother Angus when he was 20. The name came from them seeing the letters “AC/DC” on the back of his sisters sowing machine.